Finally the day has come. Today we visit the magical pangong lake. I was EXCITED. The ride ahead was a long one today and a tougher one at that. The mighty Chang-la has to be crossed.

So, with only the ‘important’ things from the luggage we head of to face the mighty Chang-la, to be finally rewarded by the magical views of Pangong Tso. Had a quick break-fast of croissants & coffee and in no time, we were on the Leh-Manali highway. After sometime on the beautiful Leh-Manali highway, we took the diversion towards Pangong. I was really enjoying the ride, everything about it.

Beautiful, small villages sandwiched between majestic mountains came and went. One thing that was different today, compared to other days was, the inclines were steeper. I had expected some snow today but that was not to be :(, at-least not until we were climbing the mighty Chang-la.

As the ascent began, the temperature started to fall pretty fast and it was very very cold by the time we reached the top. One or two kilo-meters before reaching the top, there was snowfall 🙂 which kind of made-up for the lac of snow. Made me very happy :).

By the time we were at the top, i was pretty hungry and directly headed towards the dhabba for a steaming cup of tea, coupled with maggi. By the time the maggi was done, the snowfall too had subsided and I finally went to the milestone to take few customary shots.

Done with the photos, started the descent. The road was no better than what it was that we faced while ascending. There was hardly any tarmac, just gravel and boulders.

Once descended, the roads were amazing, very well maintained. The plains, the mountains, the villages and the snaking roads, everything was so so very beautiful. Surreal.

By the time the sun was on the other side, announcing the end of another day, we had the ‘first view of Pangong’. The ‘view’ made us excited and we started moving faster.

At the first village at the banks of Pangong everything seemed to be influenced by ‘rancho’. Rancho hotel, rancho guesthouse and what not…. 😉

We decided to move on and after half an hour, finally reached the Spagmik village at the banks of pangong. It was pretty cold here but, no as cold as i would have loved. Booked a homestay here and then came out for a stroll.

The sun was setting and the golden rays of the sun, on the mountains peaks painted a beautiful picture.

After a somewhat peaceful night at the Home Stay, woke up afresh. Just a basic breakfast of tea and biscuits, started towards the 3 Idiots’s point.
Spent some quiality time at the banks. The beauty of the lake and everything around cannot be described and can only be felt best when ‘experienced’.

Finally started for Leh and after an uneventful journey, reached Leh by late after noon. Strolled the streets of Leh and tasted some awesome Thukpa.
After a fantastic dinner at the roof-top resturant with some old school friends (who were also on a trip) headed back to our guest-house.

Tomorrow we start our return journey! 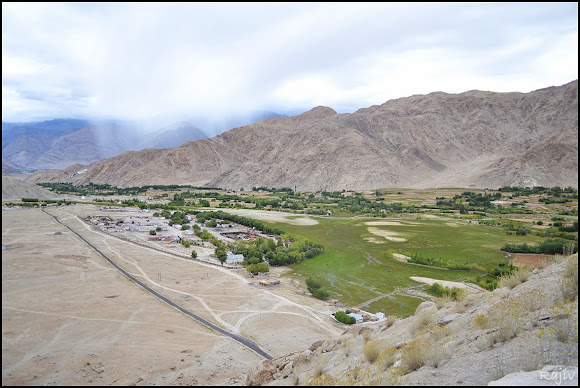 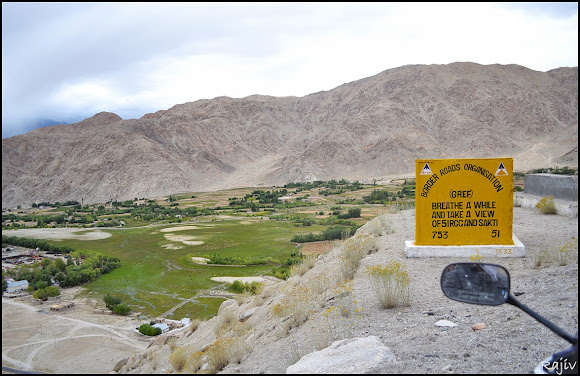 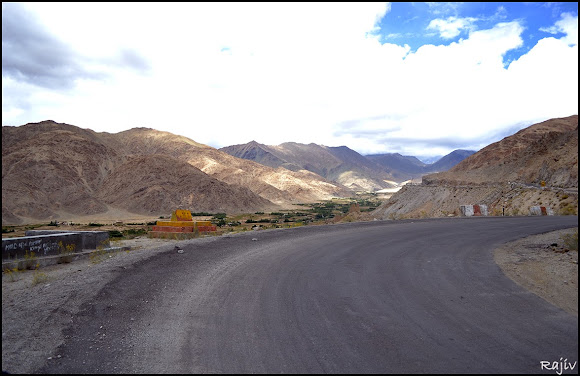 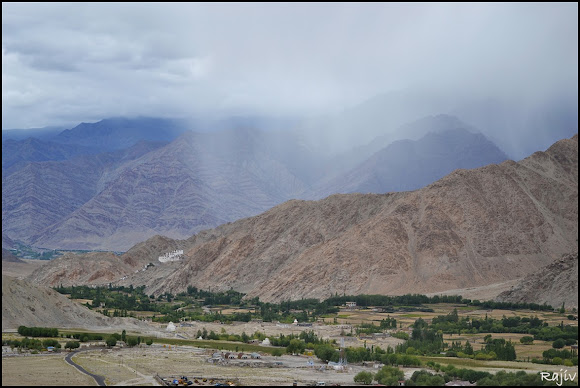 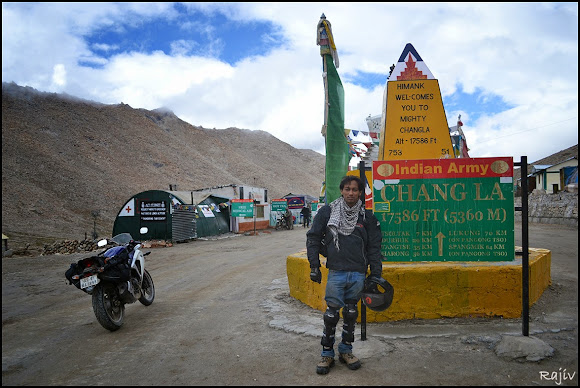 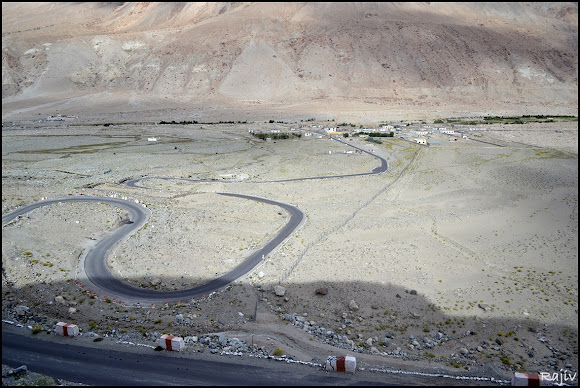 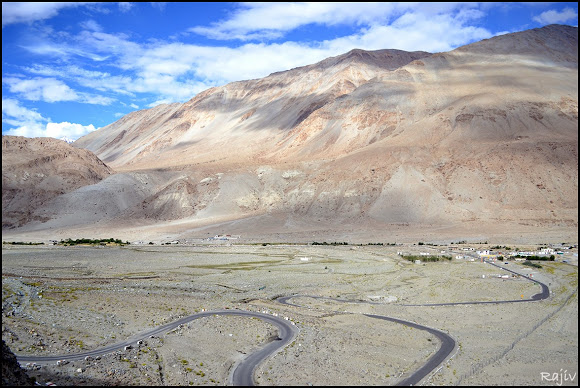 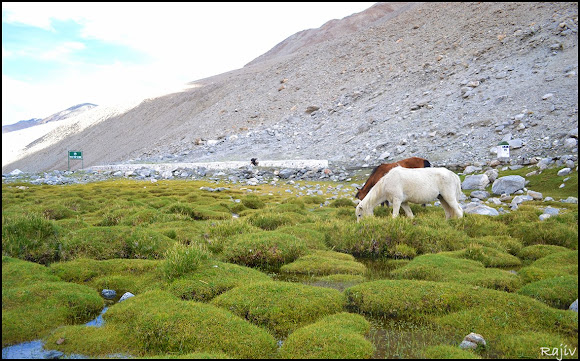 First view of the magical Pangong! 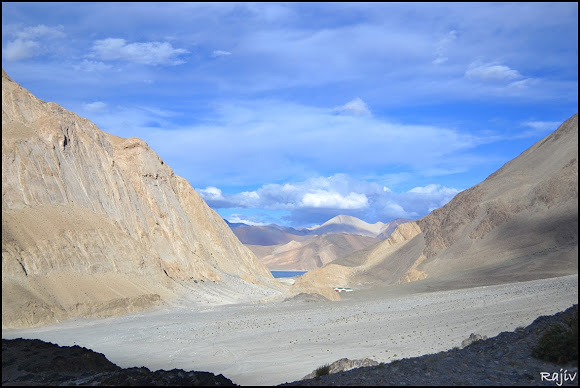 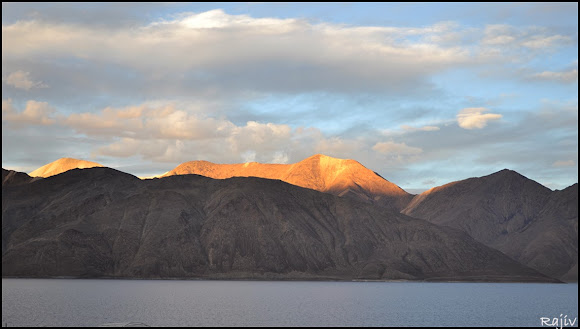 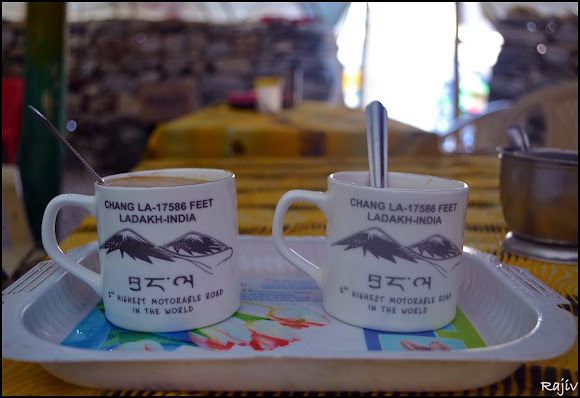 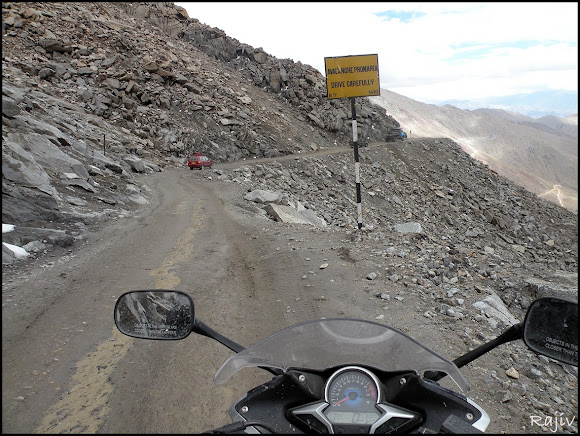 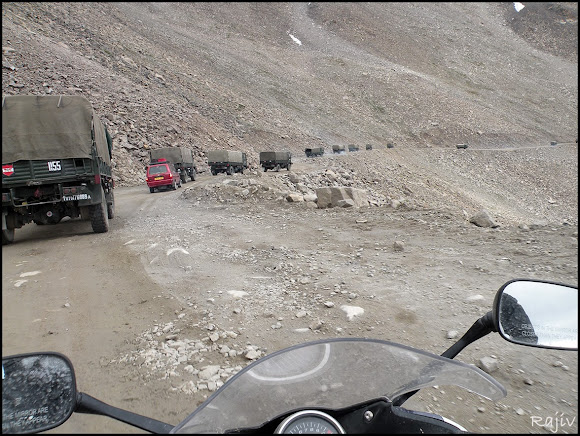 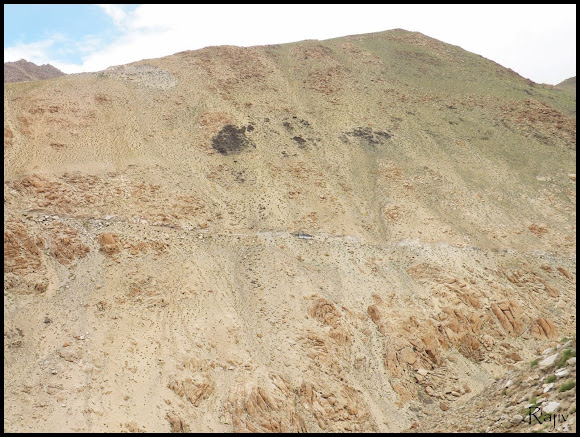 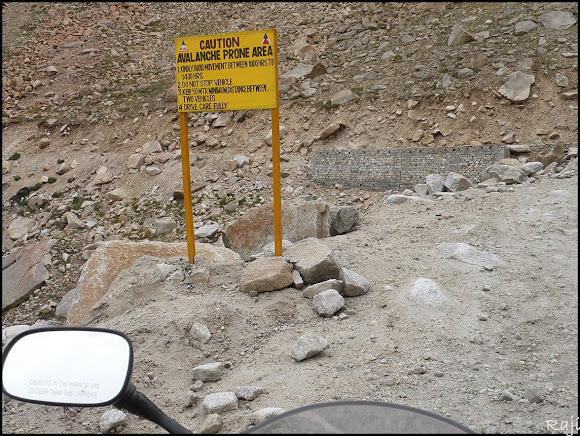 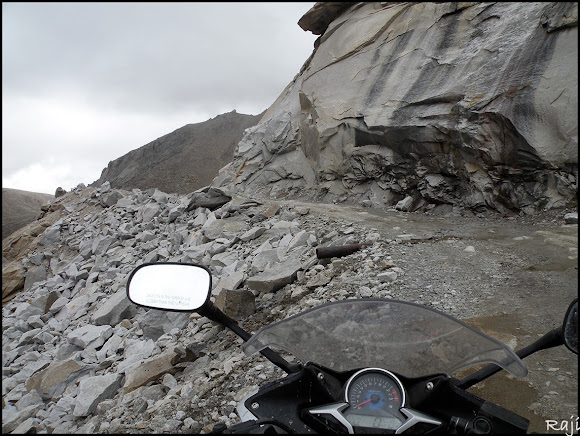 The magical blue and the steed 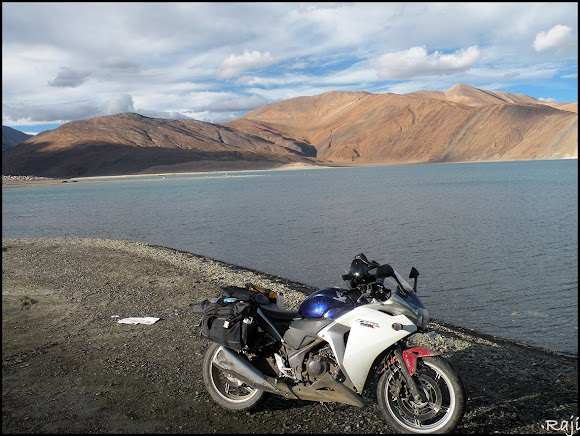 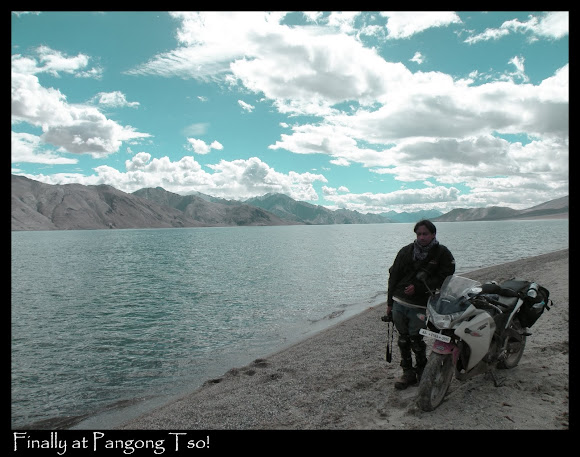 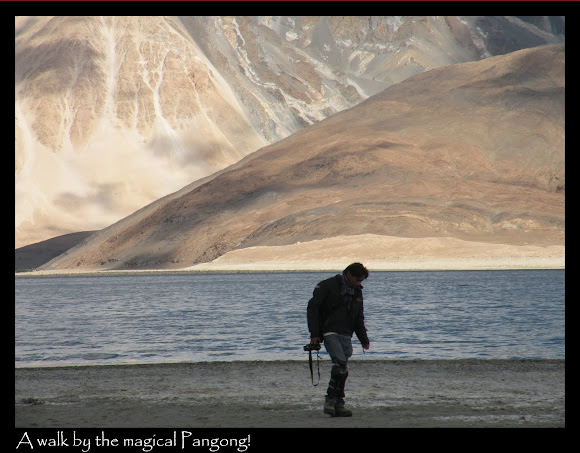 And some from the next day! 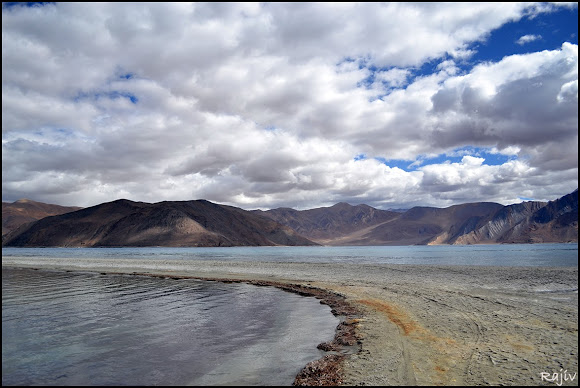 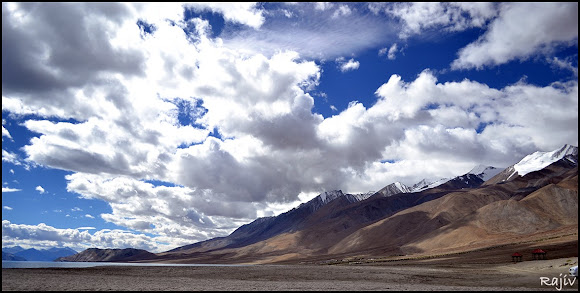 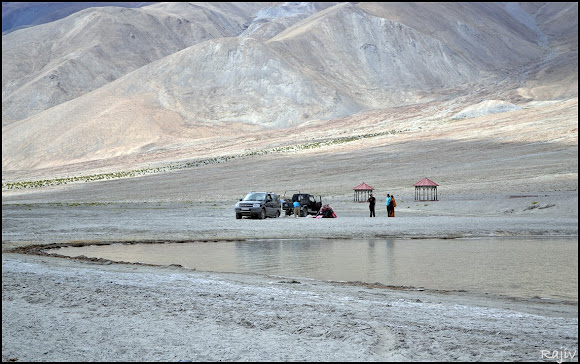 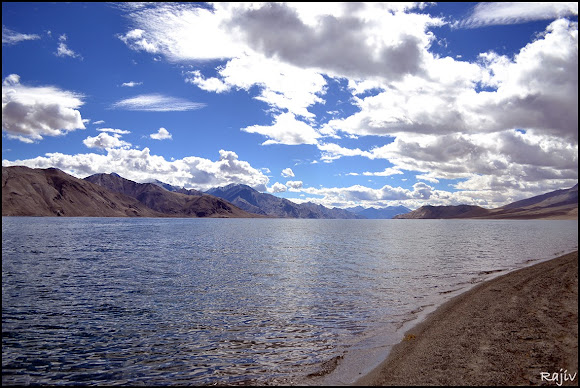 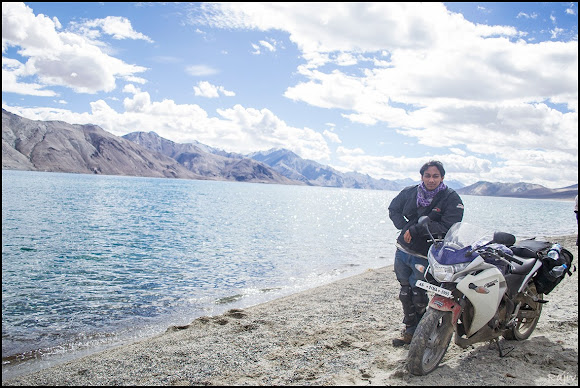 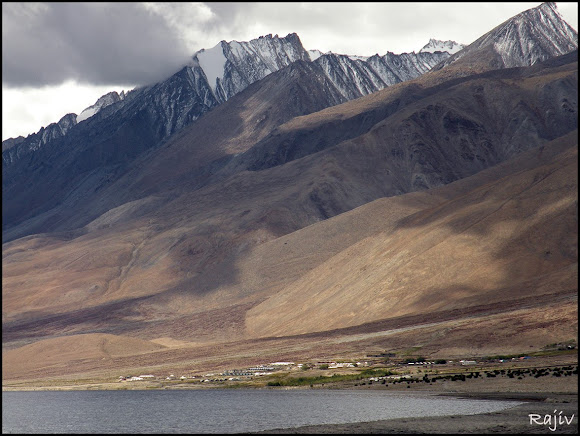