The past few months had been very hectic for me and I was feeling very stressed. I knew I needed to freshen-up and what better way to do it than hitting the highway, on two wheels!

Because I was going on a ride after quite some time, I decided to keep it a short one and hence, decided to visited the twin waterfalls at Shivasamudram, the Gaganchukki falls & Bharachukki falls which are not very far from Bangalore.Also, being the monsoon season, it made more sense to visit it a waterfall or waterfalls for that matter!

Photos From My Bangalore To Shivanasamudra on Bike Ride

Distance between Bangalore to Shivasamudra is just around 140 kms so, I was in no hurry and left home only about 8 am in the morning.

Getting out of the city’s mess was the biggest pain and it took me at-least more than half an hour to get on the highway, if not more. But once I was on the awesome NICE road, all the frustration of the city traffic vanished and I had a BIG grin on my face :-).

Bangalore To Shivasamudra By Bike

The road became narrower but the ride was very pleasant nonetheless. Just before Kanakpura, I was getting pretty hungry and decided to have my breakfast on any road-side dhaba that comes next. Luck was not with me in this aspect and I ended up at a dhaaba, which, even though looked very nice, had almost nothing to eat other than couple of items. Somehow finished whatever I could and resumed my ride. The roads were again awesome and the surroundings, very scenic.

Its one single and very obvious road to Shivasamudram, no chance of getting confused. Once in Shivasamudram, I asked around and finally reached the first water-fall, Gaganchukki!

I was bit dis-appointed to see it as it did not have as much as I would have loved to see but, the cloudy weather made-up for that. It was a beautiful day. There are no water-activities at Gaganchukki. Its at Bharachukki where water-activities like boating and fishing,etc. can be done. You have couple of view-points at Gaganchukki to see the falls and thats about it here. 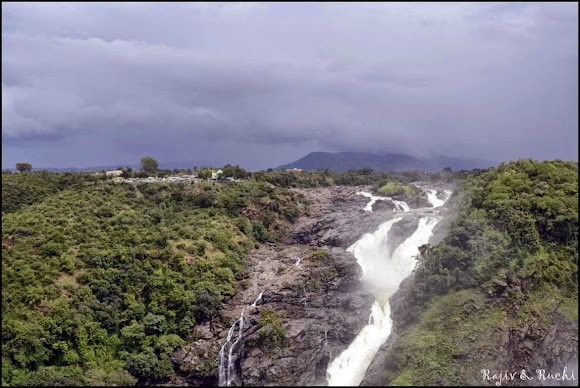 One thing I would like to confess, as I did not do any research about the falls whatsoever, I thought that the two streams that I were here were Gaganchukki & Bharachukki !! I came to know how wrong I was only after I had spent more than a couple of hours there.

The ride to Bharachukki was again a nice one with the road passing through small villages. Also, there is an entry fee for vehicles at Bharachukki. I paid Rs.10/- and I guess it is more for 4-wheelers.

Also, to be noted is that, beyond 5 PM (or was it 6 PM) no one is allowed. You have to leave the compound of Bharachukki falls before this closing time. 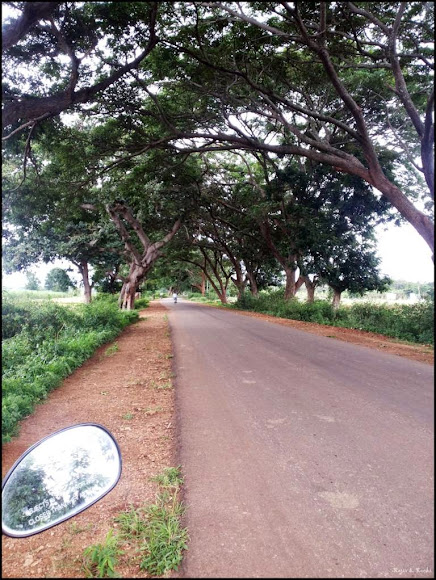 This place was more crowded compared to Gaganchukki, mainly because of the availability of water-activities here I guess.

I spent some time here, clicked some photos and then, started my journey back to bangalore. Somewhere in my confusion, I took the road via Maddur and it was not at all a smart decision. The road was horrible, full of pot-holes. And after that, the traffic of the towns en-route.

In and around Bharachukki waterfall

Reached home after a very satisfying ride at about 8 PM.
And yes, all the stress was gone, for sure 🙂 .

Do you like waterfalls? Have you been to Shivasamudra yet?

12 thoughts on “Bangalore to Shivasamudram On Bike”