After having a wonderful time at Anup Sir’s home, Anup Sir dropped me to the NDLS station from where the bike was to be collected. Also Subhadeep, the other rider joins me from here. I had thought that we will be starting from Delhi by 12.30 – 1 PM but were only able to leave by 3 PM because of the time taken for the bike to be delivered and the city traffic mess.

Next important thing was to catch up with Narender bhaiya with whom I really wanted to meet before I start the trip. He was waiting for me, on the way and had come from quite far just to meet me(sorry bhaiya for making you wait for so long). Finally caught up with him at the Mukarba chauk, it was really nice to meet him in person. He gave some valuable tips and suggestions for our ride and then in half an hour, we had to leave.

Just after coming out of the city mess, the sight of the highway was very welcome. At-least riding without any jam would give some respite from the heat. It was already too hot & humid for me. The plan for today initially was to reach Amritsar but as it was already almost 3.30PM by the time we left Delhi so the fact was that, reaching Amritsar before late night was not going to happen. So, night – halt was decided at Ludhiana.

It was almost 4.30 in the evening and we were hungry and were looking for a good dhaba where we can freshen up and then have our late lunch. We halted at this big dhaba on the road-side, somewhere in or around Sonipat and ordered butter-nan, butter-paneer, and rice. When the food came, we realized we had ordered way too much . The food was delicious and we gorged to the brim .

After some 40 minutes there, we started again. There was nothing special about today’s journey but as I was riding through the towns Sonipat, Panipat, Karnal,etc. about which I had only read in my school books until now, a lot of strange thoughts came to my mind. It felt great to realize that I was actually riding through these towns, on a bike. I was feeling something strange inside me. Was it kind of a sense of achievement? I don’t know but what I can tell is, I was smiling from inside and was really enjoying the journey .

Nothing eventful or interesting more in the day and out next stop was at Ludhiana at about 8.45PM. Checked into a hotel for which cost us Rs.1100/- for a double AC room. Opted for having dinner outside. After dinner, retired for the day at about 11PM.

Some photos of the first day:

With Anup Sir, in his *den* 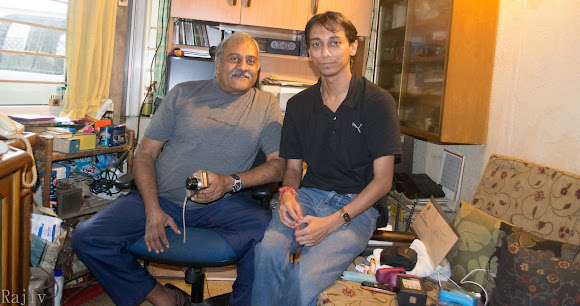 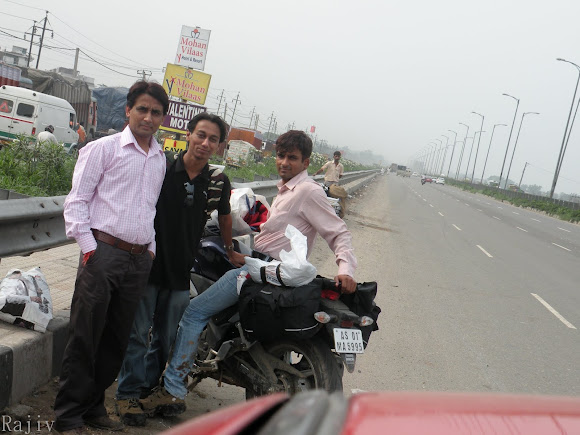 Subhadeep and the food 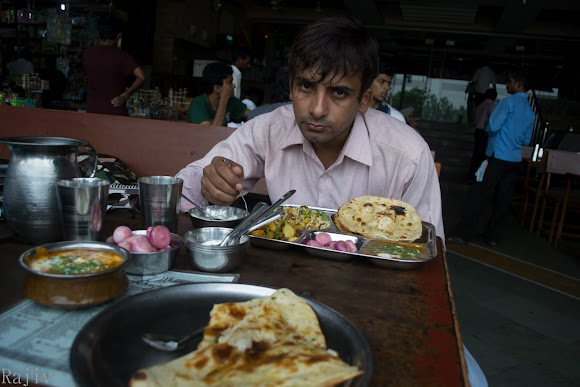 Ready with the Steed 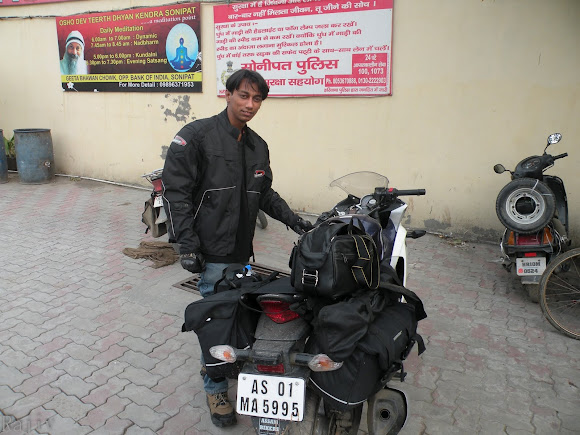