As our destination for the day was Amritsar, which was just 142 kms, we started from our hotel at about 8.30AM. By the time we left for Amritsar, the sun was already shining bright and I could very much feel the effect of that inside the riding jacket.

Ok, one thing I should have talked about in previous day’s post is that, on our ride from Delhi to Ludhiana, the saddle bag mounted on the Pillon’s seat has been constantly smooching the rear tyre and the base of the right side was almost open wide. The damage was so much that the bag’s surface, the hard plastic inside the bag’s floor, a shirt, a muffler and a thick sweater of mine, all of them lost a part of them. The worst casualty was the sweater which was having a big hole at the center of it.

I noticed this after unloading the bags at the hotel. So today, the first thing to be done was to do some kind of jugaad about the bag. Just out of Ludhiyana, there was some small village with few houses most of which had pieces of wood infront of them. Went to one of the houses where one sardar ji was walking around.

We told him that our bag was torn because of rubbing with the tyre and it would be great if can allow us to pick up couple of sticks from his stock of wood so that we can do some kind of jugaad to save the bags from any further damage. He happily agreed to our request and actually told us to pick up as many we needed.

Thanked him and picked up a stick and was trying to fix it on the side of the bike but we had nothing to tie the wood. Sardar Ji saw this and came up with a couple of coconut wali rassi and even tied the sticks on both sides himself. This gesture really touched me. After bidding him good bye, moved on.

The road ahead was awesome and I was maintaining a good speed. Plan was to have break-fast in an hour or so, wherever there is a good dhaaba which we did after about one hour of leaving Ludhiana.

On the way to Amritsar comes the Lovely Professional University where I have a brother studying. I thought of meeting him by lunch time so, after moving further for sometime, stopped at a dhaaba just next to LPU. Gave him a call and asked him to come to the dhaba. He came but after a long time, by when, my lunch was over. Was with him for 5mins or so and then we moved on towards the destination of the day, Amritsar.

We reached there by 2PM, taking quite a few photo breaks. I repeat, the roads are lovely!

First job in Amritsar was to get the bike washed and basic lubrications done. This took close to 2 hours in the Honda showroom. In these 2 hours, we met a guy in the showroom who tried a lot to scare us I guess!!

Yes, he came up with all sorts of stories of chain snatching, pick-pockets and what not!! He suggested us not to keep more than 3-400 of cash with us .

Okay, from the service center, we straight away went to look for a descent hotel and soon checked-in into one for Rs.1000/- for a double bedded AC room.

Had to catch the Parade at Wagah so took bath quickly and then after a quick but late lunch, left for Wagah. With awesome roads to ride on and lovely people to guide us, we were on the right path in no time. I was keeping an eye on the mile-stones as they came and then suddenly I see a big board which said Lahore 34 kms!! I braked hard and then began the photo-session .

After a couple of minutes, back on the road.

Just 1km ahead of the point from where no vehicles, you will see lot of people calling you to park the vehicle. I did not stop there as I knew that there is a Govt. Parking which is nearest to the entry. Went there and parked. My first impression after seeing the huge crowd was, ‘is it a mela!!’. As I moved forward, in the scorching heat, I saw the male gallery was jam-packed . I somehow pushed myself in that crowd and in half an hour, in my second attempt, was able to get a good place from where I can get a good view of the happenings.

I liked the parade over-all sans the crowd and the dhakka-mukki!!

After the parade was over at about 6:45PM, we left for Amritsar and now the plan was to directly pay a visit to the Golden Temple.

We reached there at about 8PM and man!! When I actully got to see it, the feeling was amazing. It was a dream come true for me. At night, its a very different experience al-together. It was quite hot even at the night but still huge number of devotees were there, doing there part of the voluntary service. Kids, old people, young girls, uncles, aunties, everybody was doing some voluntary work. It was really nice. We left the mesmerizing place at about 10:30PM with a lot of photos.

I am coming again in the morning, I said to myself.

Reached the hotel, got freshened up, ordered dinner and then off to sleep.

Meet-up with brother near LPU 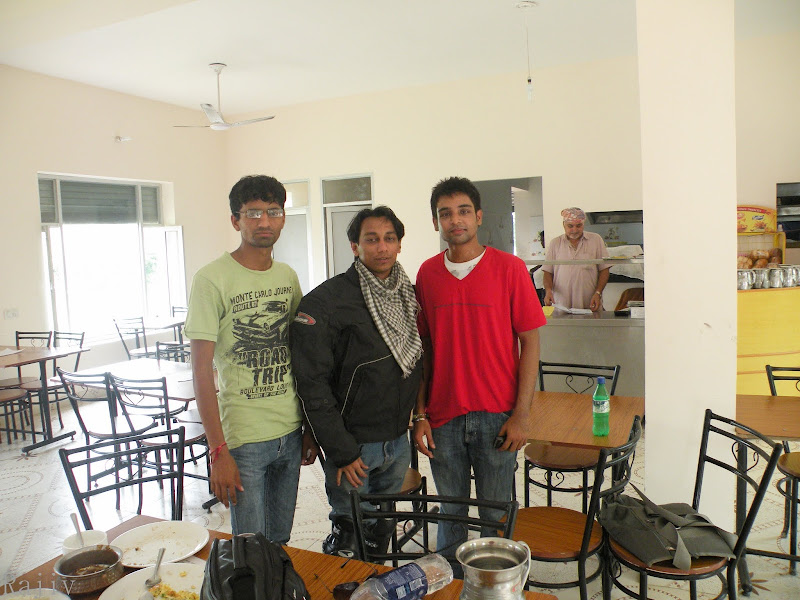 The awesome road towards Wagah 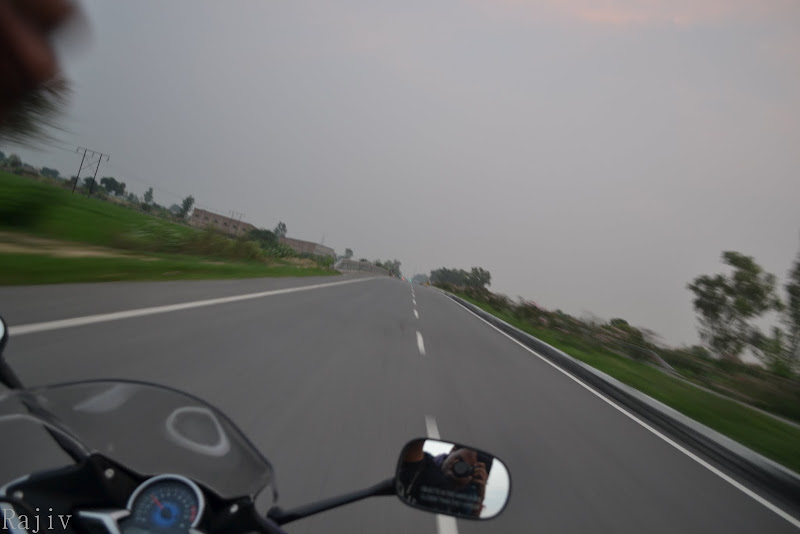 Getting a much-needed care 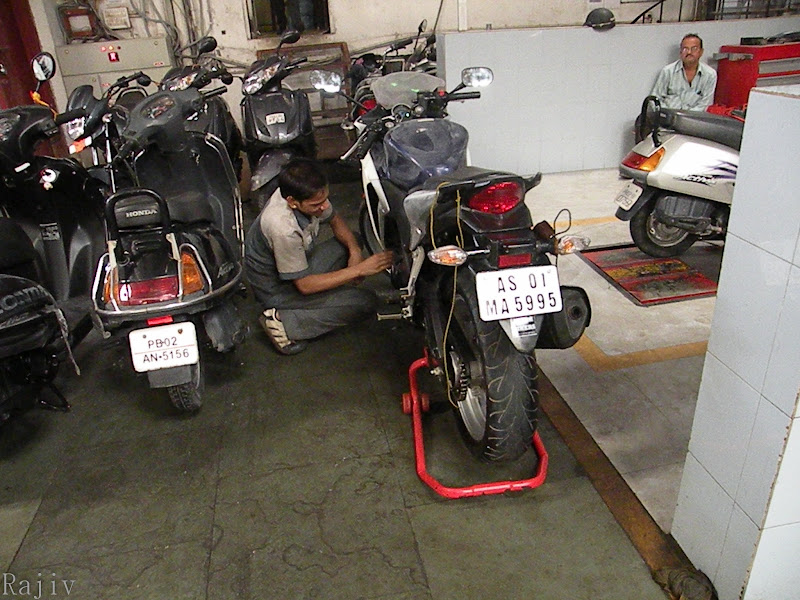 The board which made me STOP 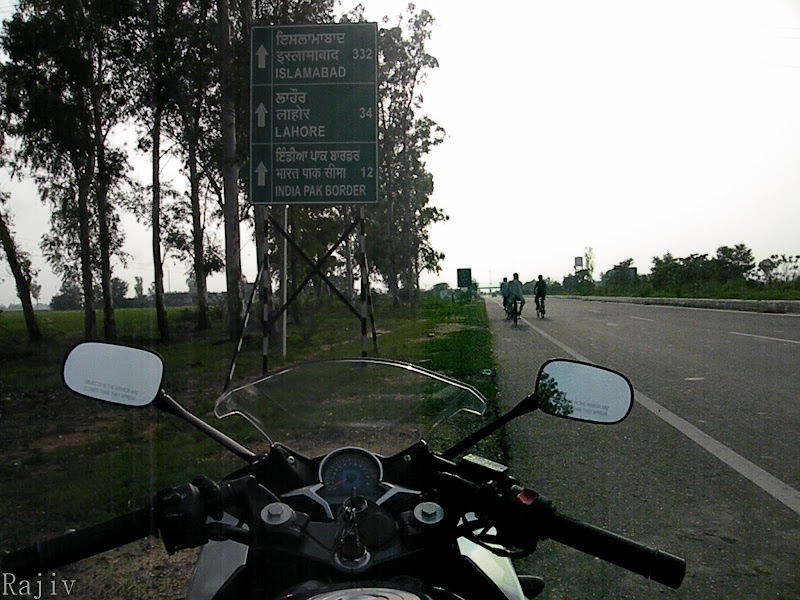 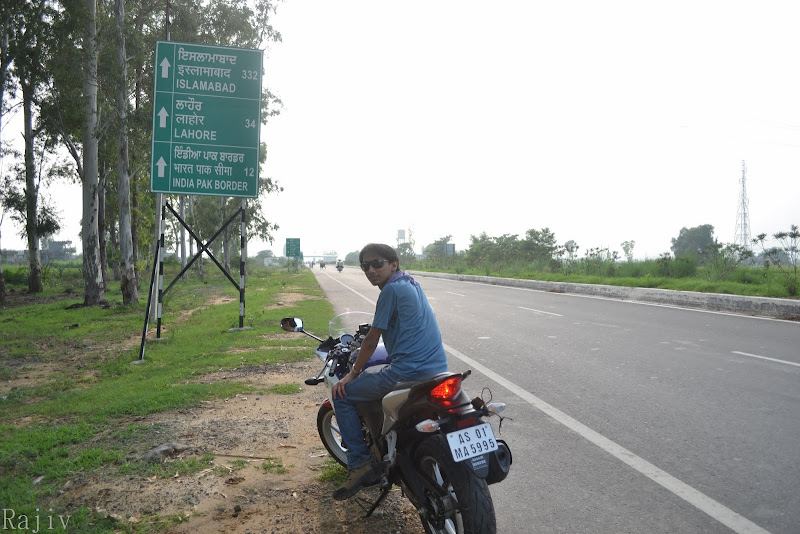 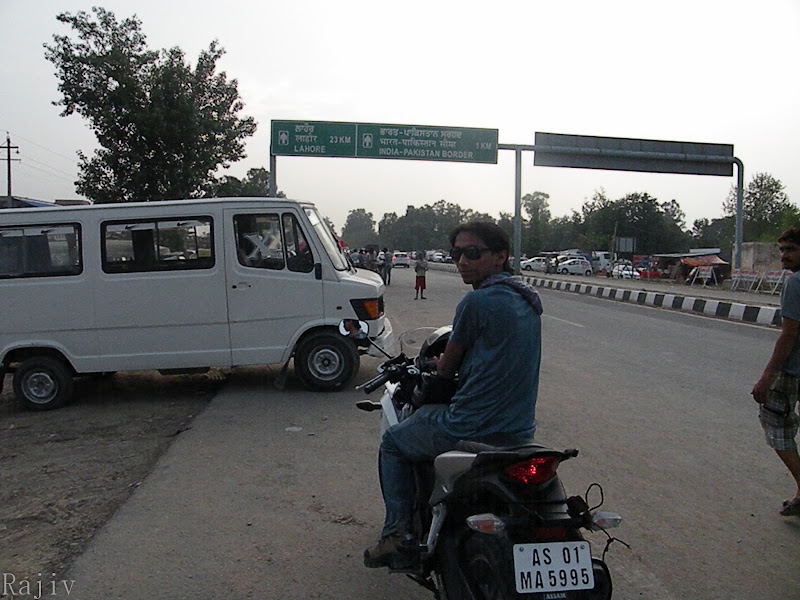 A Sikh lady with her Kirpan 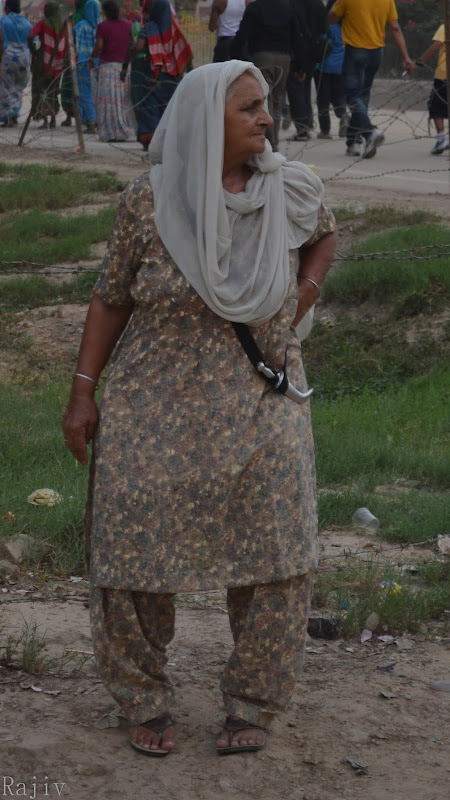 This crazy fellow was actually doing a wheelie with his Tractor 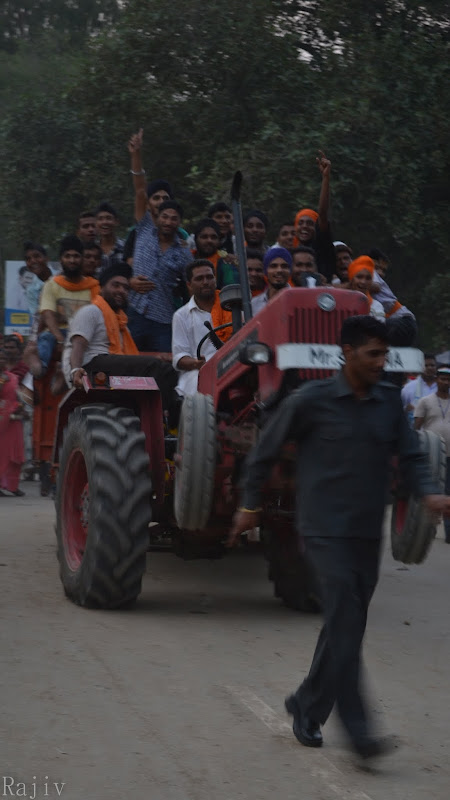 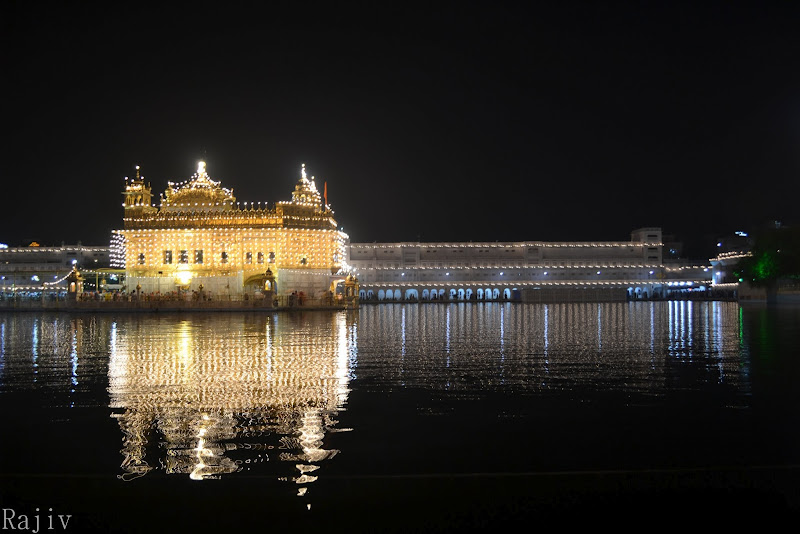 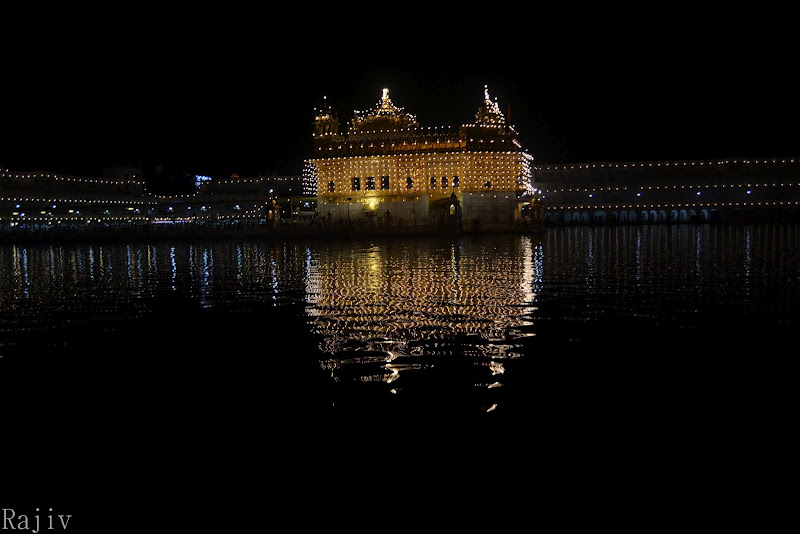 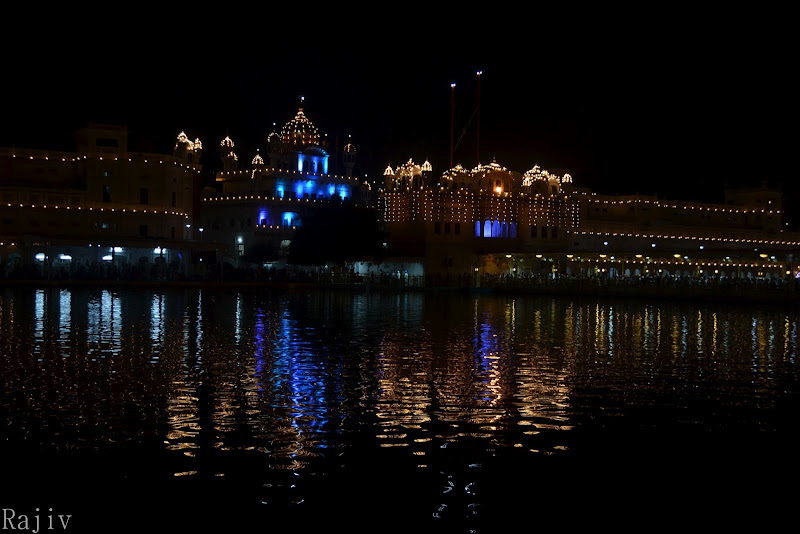 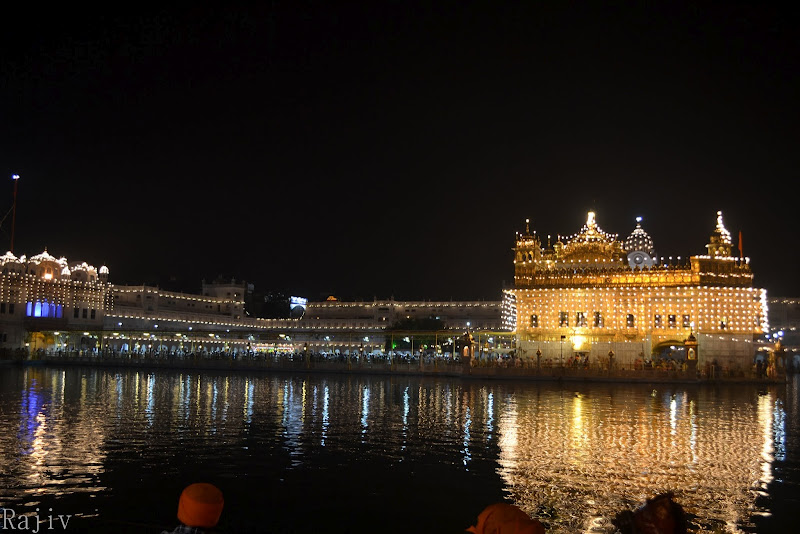 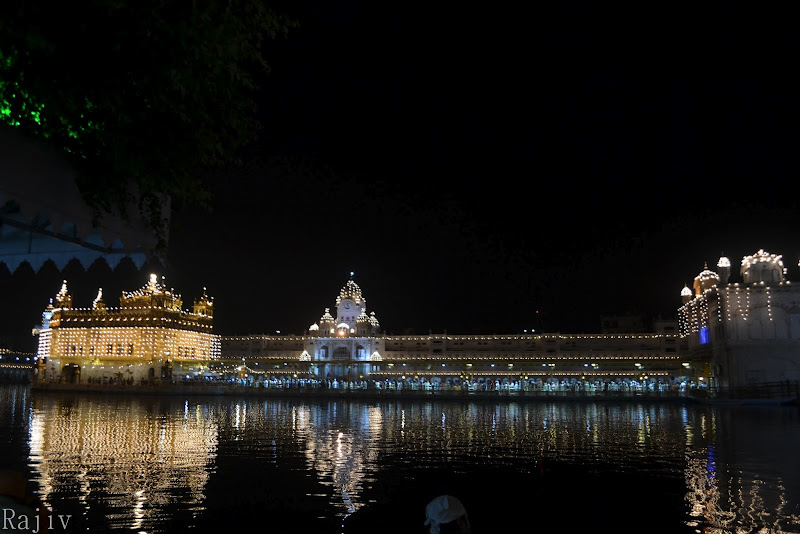