They say, ‘A trip to Amritsar is incomplete if you miss the daily beating Retreat Ceremony at the Joint Check Post‘!

One of the two must-visit places when in Amritsar on my this trip was the Wagah border’s evening retreat ceremony!

I very well knew that in order to get a good seat, I have to reach there by ~3.30PM but that was not to happen and I could only reach there by 5.30PM, roughly 40-45 minutes before starting of the parade.

A couple of kms from the parking and you start to see the crowd increasing making it look like a ‘mela‘ by the time you reach the govt. parking area!

People from all walks of life, kids, adults and old, man and women. From different parts of the country and beyond come here to witness this perfectly co-ordinated ritual performed by BSF Jawans in ceremonial uniforms from India side and equally fierce Pak Rangers from the Pakistan side.

The first two BSF soilders to march to the border gate were from the Ladies battalion of BSF.

Once the first batch of the soilders are there at the gate. One after another, some more groups of soilders continue the parade turning the environment to electric. With patriotic songs playing on both sides of the border and with excited screams of ‘Jai Hind’, ‘Bharat Mata ki Jai‘ on Indian side and ‘Pakistan Zindabad‘ on the Pakistani side, the environment is worth witnessing.

You really feel the adrenaline rush in your veins! Kids, Ladies & Men dance to the songs of patriotic songs and run upto the border gate and back with the Tri-color in their hands and kind of a undeclared comptetion goes on between the Paki and the Indian side, as to who can be more louder.

This continues for some more time and then, just before Sun down, a final batch of BSF jawans prepare to march towards the border post to lower the flag. Same happens on the other side and the Pakistani and the Indian soilders, all of them above 6’ tall and with handlebar moustaches,march towards the gate pounding their feet fiercly on the ground.

Two soilders from both sides start lowering the flag, very much in sync with each other and finally respectfully fold the flag and return back while a 3rd soilder standing there, bangs close the border gate after a very formal hand-shake with his Pakistani counterpart and starts returning to the post.

This marks the end of the flag-lowering ceremony.

There is also a daily flag-hoisting ceremony that happens daily but as far as I know, this event is not open to the general public. 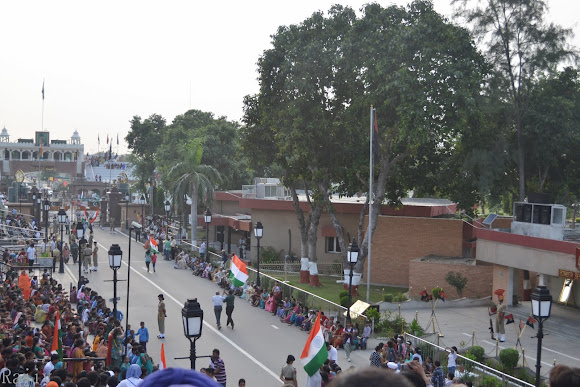 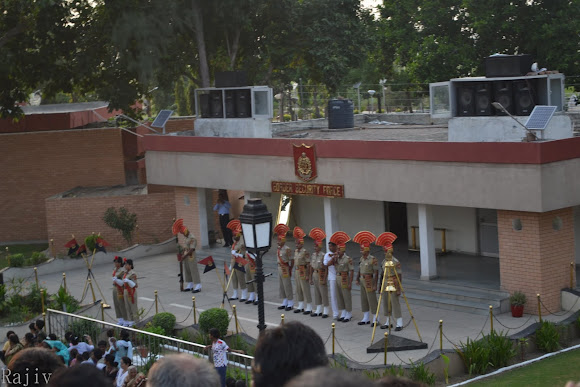 The gate & open stadium on the Pakistani side 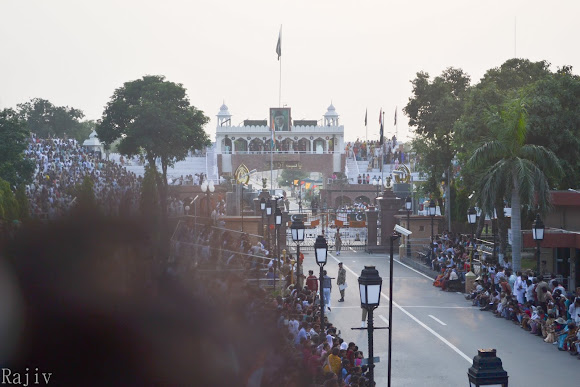 A view of the Indian gate and the Pakistani Gate 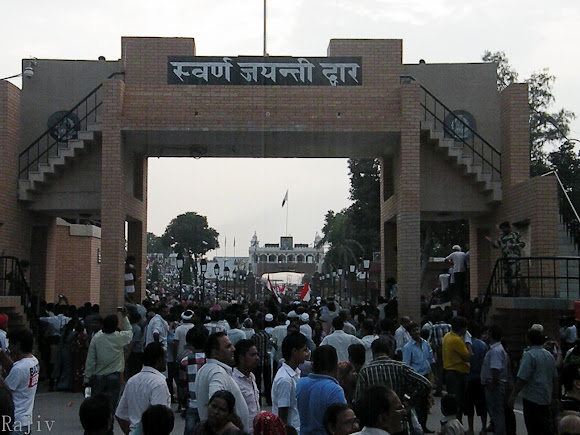 Notice how both the flags are lowered equally 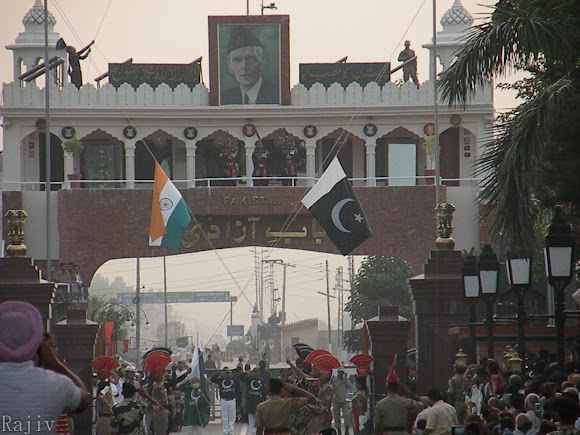