The plan today was to reach Srinagar by the end of the day and after talking to Narender bhaiya, it seemed very much doable. But, before starting for Srinagar, visits to the Golden Temple and Jalianwala Bagh had to be made. So, the day started at 6AM and after freshening up, we were at the gates of the Golden temple at 6:40AM.

The Golden Temple in the morning is no less magical than at night. The Golden Temple bathed in the rays of the bright morning sun is bound to leave a mark on you. It very much left on me! The morning visit was dedicated to photography and thats what I did, for the next 30-40 minutes. I saw a camera-crew there who were most-probably telecasting the live prayer songs that were going on there. I clicked and then clicked some more and then headed to the Jalianwala Bagh.

Even at this time in the morning, it was quite hot and humid because of which, I planned to make the visit at Jalianwala Bagh a very short one. Went in and saw the memorial pillar which, till that time, I had only seen in TV & books. Then had a look at the Sahid Kuan which now has a wall around it that bars you to actually look uptill the bottom of the well.

The sight of the well, the place from where innocent people were shot at and the bullet marks on the wall is bound to bring a thousand thoughts in your mind and make you more or less emotional :(.

Clicked a few snaps there and then headed for the hotel. I wanted to leave the city mess as soon as possible in hope of getting some respite from the heat. After asking a couple of locals about the correct route, we were out of the city in no time. The city and the outskirts, both were equally hot :(. It was almost 8.30 in the morning when we finally stopped for breakfast at a small road-side dhaaba!

We ordered aaloo parantha which came with lots of butter! Even though I wanted to have all of it, I finally returned one of the two BIG pieces of butter as I realized that even one piece won’t be finished by both of us (it turned out to be true). While having breakfast, we had a nice chat with a local about our ride. He was pretty curious about my knee-protectors and was insisting I accept that I was actually part of some racing team and have not just come to ride and see places :p.

Break-fast done, I was back on the saddle, hoping for some respite from the heat. The road was a mix of excellent and under-construction patches and all in all,was very good to ride on. I was enjoying the greenery on both sides and the awesome tarmac!

The wonderful & mostly straight road allowed me to maintain a constant speed of about 90-100kmph (except the under-construction stretches) pretty safely. The guy at the dhaba had told us that after reaching Pathankot, the weather will be much more pleasant and so, I just wanted to reach there as soon as possible (no careless riding at all). Narender bhaiya had told me to ask about the Udhampur by-pass once I am near Pathankot and not to go inside Pathankot but I somehow got confused and went inside Pathankot. After asking few already confused people who had no idea what I was talking about, I got one guy, most probably from the army, who told us to track back some 3 kms and then take a right from there or ask somebody. Reached the point from where we had entered the city and then asked for directions. Was told to go till towards Lakhanpur toll. I was there near the Lakhanpur toll soon. Clicked some more pics and then finally, entered in Jammu & Kashmir. Again, a little sense of achievement was felt :D.

Talking about the heat, I was finally in the state of Jammu & Kashmir and it was still, as hot as Amritsar! To add to it, I was wearing the heavy Riding Jacket:(! I was already frustrated at the heat but thought moving ahead could bring some respite and hence continued after a couple of minutes’ break just after the Lakhanpur toll.

As I wanted to skip Jammu so the plan was to take the Udhampur by-pass. Asked couple of people about it and was asked to go uptil Samba and then take a right for the Mansar-Udhampur by-pass.

The road continued to be awesome and straight and riding on it was sheer pleasure. One after the other, small towns passed by and the hills that seemed to be quite far, started to come closer and closer. Hunger was creeping in but I preffered to push on rather and planned to have lunch in Udhampur because I was not at all in a mood to have lunch in this heat. Rode on through the small and beautiful towns which had significant presence of the Army and finally after some more time, at an intersection, asked for the route to the Udhampur bypass.

There it was, just on my right side! Took the right turn and started towards Udhampur. There was immediate change in the road condition. The wide and awesome taramc gave way to a 2-lane broken road, with potholes and unmarked turns. The road passed through quite a few small small villages. The condition of the houses said that this section is not one of those where the politicians have paid any importance to.

Very soon, the hills started but there was no respite from the heat!! The road condition improved after some kilometers only to detoriate again. The ascent was quiet steep compared to what I had expected. With each turn, the scenery turned better and better. By now, I was quite hungry and having doubts if Udhampur for lunch will be too far for my stomach! Moved on and then saw a beautiful lake and at a distance. Some colorful flags were also seen which meant either an Army establishment or a tourist place. I wished it be the later, which will definately be a good news for my stomach! On reaching there, I came to know it was Mansar Lake and more importantly, not an army establishment.

‘Khaana!’ came the sound from inside me! :D. Went to the parking and asked for the location of resturants! Were shown the direction and we immediately started walking in ‘that’ direction. As we walked, we got a lot of curious looks owing to our attire :). Out of hunger, we didnot even bother to remove the luggage from the bike and headed for ‘fooooood‘!

After crossing quite a few eateries who were selling just chips & maggi, we finally came to the JKTDC resturant where we had a ‘full’ lunch! Service was good, food was Ok, was not very expensive but I didnot get the room freshener or anything I asked for to get rid of the flies!

Once out of the resturant, with the tummy filled, I realised how beautiful the lake was. Took few snaps of the lake and surroundings and then back on saddle. It was almost 3.30-4PM so it was almost clear that we are not going to make it to Srinagar today. The night-halt will be decided depending upon where we reach by evening. For now, Ride…

By now, the roads have improved and the ride was pretty comfortable. Many small and beautiful came and passed by. The greenery all around was making the ride all the more enjoyable. We came across quite a few railway bridges enroute which were quite BIG in size. Also rode through tunnels which was a first-time for me.

Okay, I have not mentioned it till now but, I was not able to purchase DIAMOX either in Delhi or in Amritsar and I HAD to get it in Udhampur but I was not sure how big a town/city Udhampur was, which was a bit of concern to me. As I entered Udhampur, it seemed to me more of an Army cantt. than a Civilian town. It is actually a civilian town with significant Army presence as opposed to my first impression.

Asked for Medical shops when in Udhampur and was directed to the Hospital Road . To my relief, got Diamox in the second medical shop where I checked :). Taked up at Udhampur and moved ahead.

Place for tonight’s halt, Patnitop seemed to be the obvious choise but we still had quite a few hours left with us before sundown. Also, staying at Patnitop meant reaching Srinagar late which in turn meant, high chance of wasting one more day in Srinagar. So, I decided to stay somewhere in Ramban or Banihal.

As we started the ascent for Patnitop, finally the weather started to become pleasant and then cooler. Patnitop seemed to be a quite beautiful hill station with a wonderful weather. Withing a span of 30 minutes, from bright & hot to a misty & cool weather, it was a very welcome change, something I really enjoyed, so much so that, once I even thought of taking the night halt here :).

A call to Narender bhaiya brought my mind back in place and I decided to move ahead, atleast upto Ramban. As we moved away from Patnitop, the temperature again started to rise (as we were descending) and I was wishing that Ramban be atleast as coool as Patnitop, if not more :).

We reached Ramban in an hour or so, riding side-by-side with the furious river (which river it is?) which made the ride and the place all the more beautiful!

Once I reached Ramban, I was thinking if Banihal can be done before its late night but then, we decided to end out day here. The town of Ramban is a pretty small one. While looking for a hotel, we actually came to the other end of Ramban and then had to return after realized that we were actually out of the town.

Finally got a double bedded room in a hotel just by the side of the highway which gave a very nice view of the town on the other side of the river for Rs.850/-, freshened up and went out for dinner.

Had a very good dinner at the JKTDC resturant which just by the highway and then returned to the hotel and ended the long and tiring day :).

About Mobile Networks:
Only BSNL Postpaid worked. Reliance and TataIndom Postpaids did not. 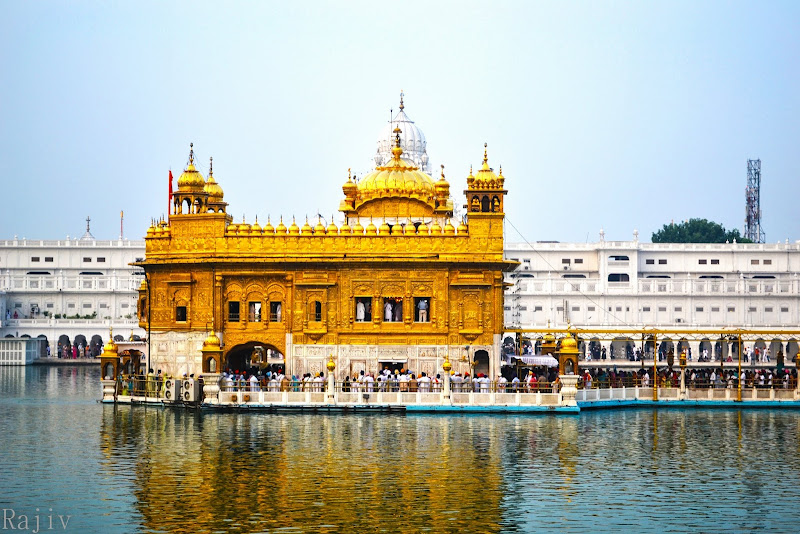 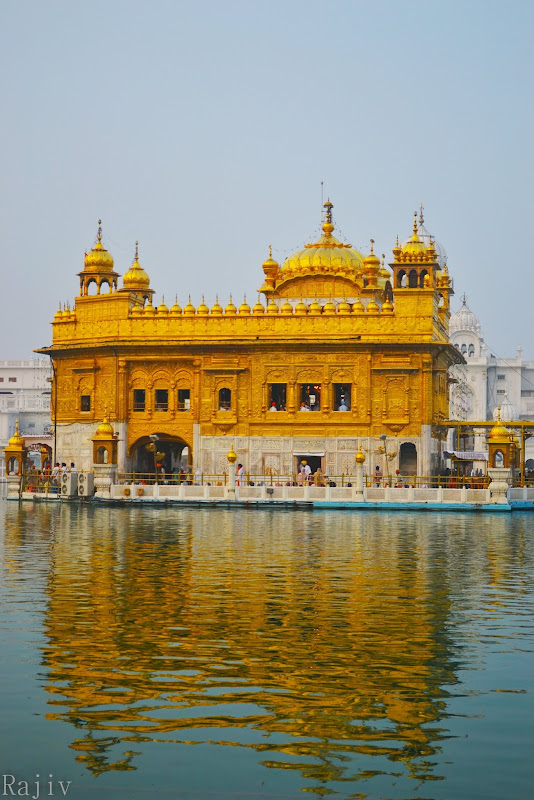 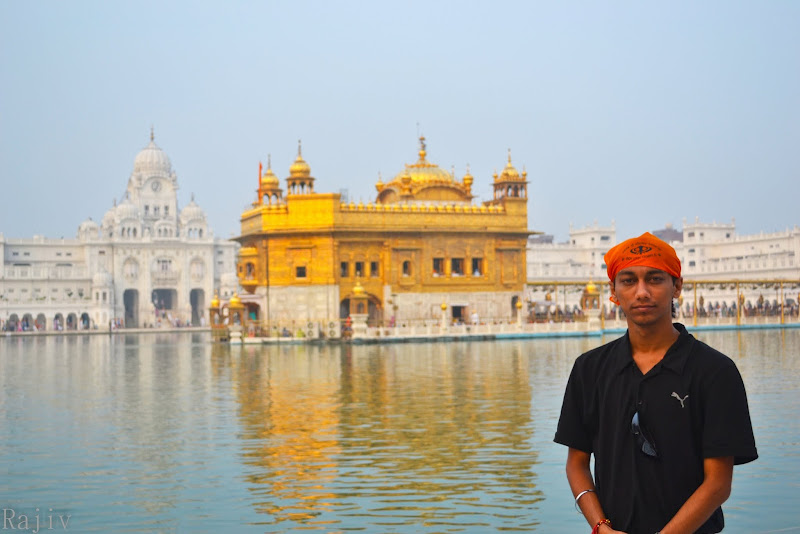 The other side of Golden Temple 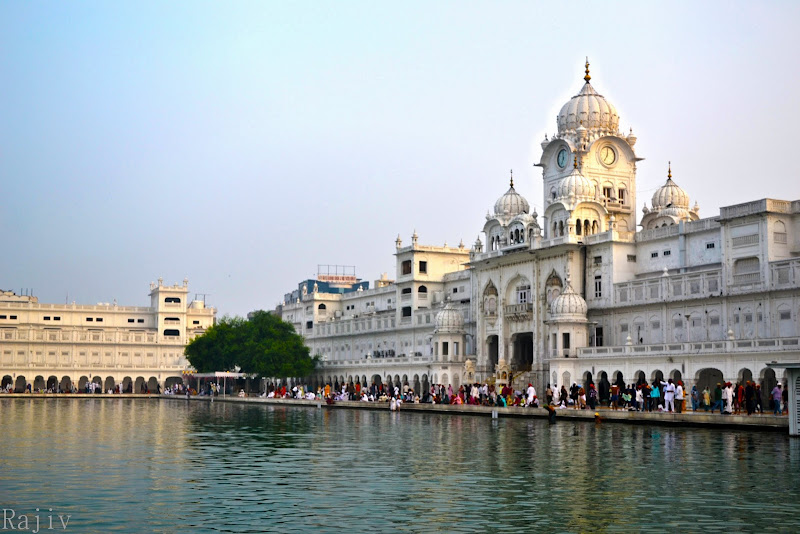 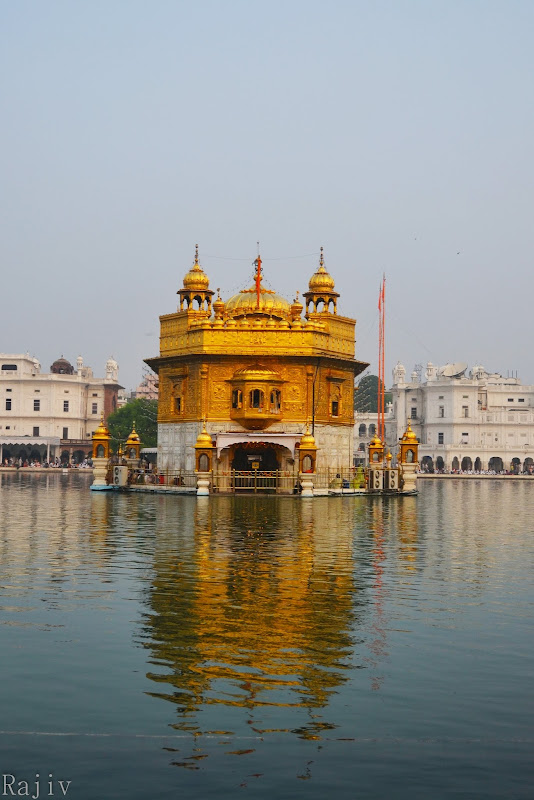 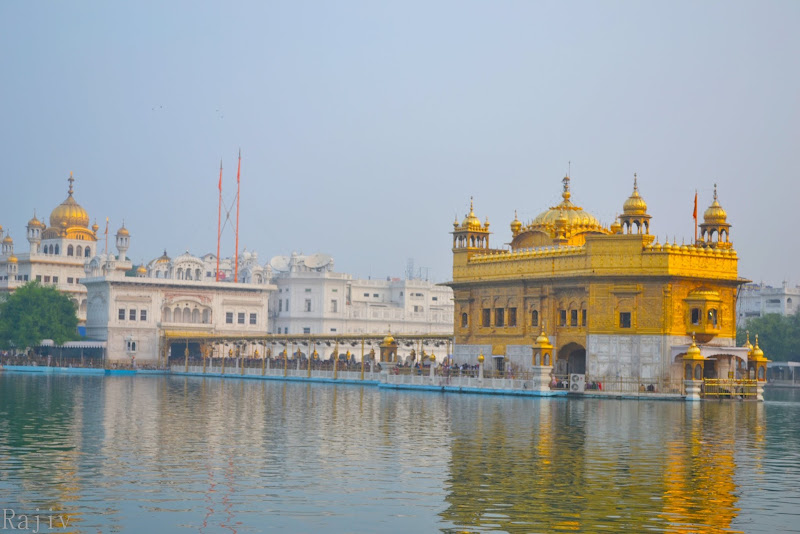 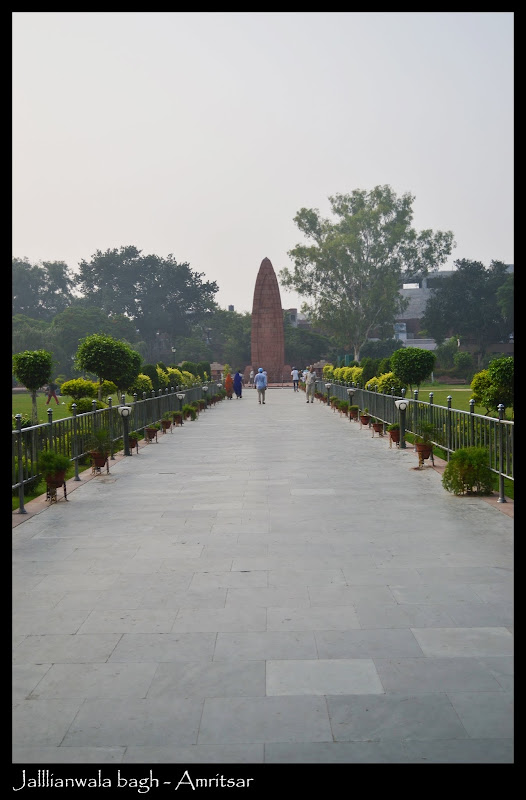 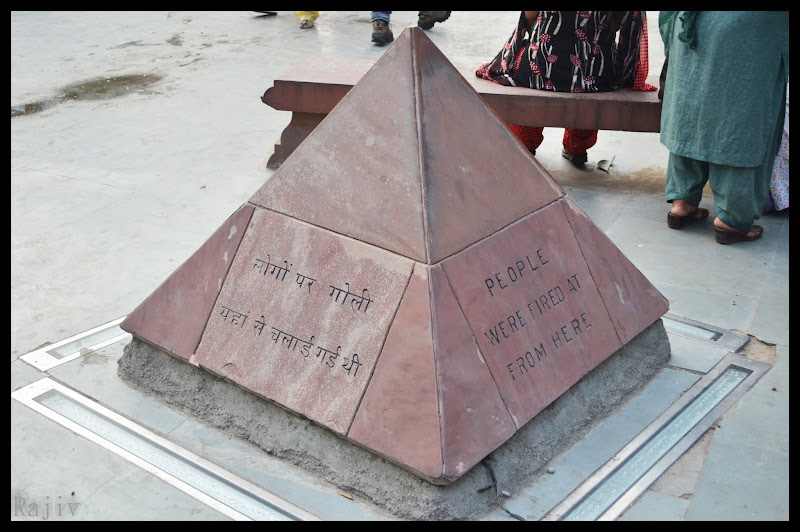 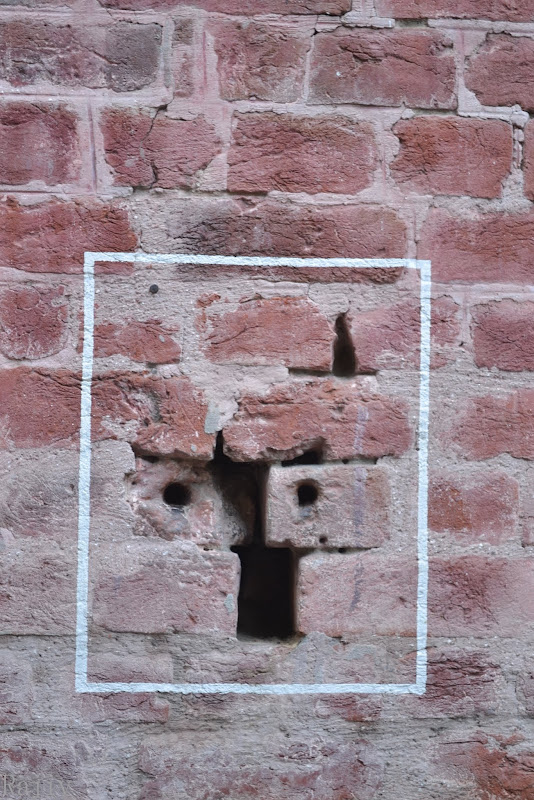 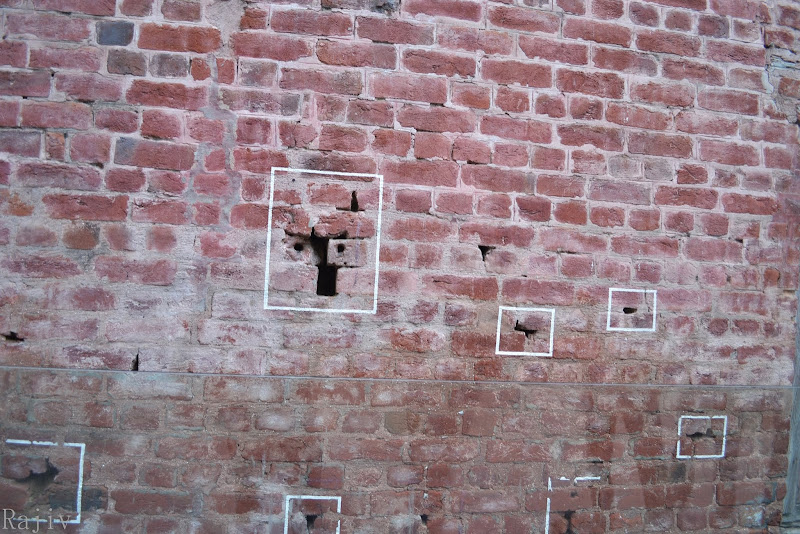 More pics of Day 3 to come…