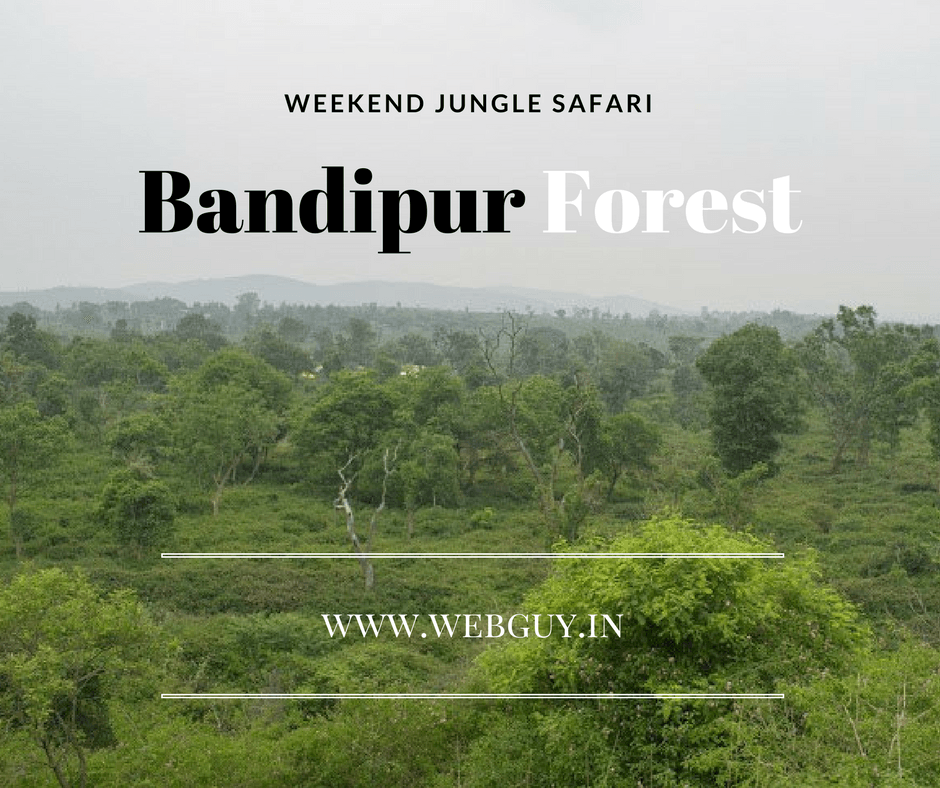 Sitting by the first window of the ‘canter’ my eyes were continuously scanning the jungle through the windshield in front of me and the window on my left, looking for any signs of the elusive big cat which had been supposedly sighted in the area the same morning. Except for random glances out of the side-window towards the sparsely vegetated hillocks far away, which hardly made me feel I was in a ‘tiger reserve’, my eyes have been fixed right ahead for quite some time now with no luck.

Apart from crossing a few playful squeakers and their busy parents we were yet to come across any wildlife when suddenly, the sleepy driver hit the brake hard and pointed to his right.

Presumably a mother-child duo, enjoying the early morning sun. Confused about whether to click them or just watch them in their own backyard, by the time I finally pointed my camera in the right direction, the younger one had already escaped in the bushes and the other one was on its way. All thanks to the cacophonous lot present in our bus. Old and young alike, they got so excited even before they actually saw the peacocks that had it been an open vehicle like a jeep and not a bus they could easily have thrown themselves out of the vehicle.

The Sounds of The Jungle – Bandipur Tiger Reserve

Ten minutes or so into the safari and the jungle finally started to get thicker and greener. The joyful chirping of birds complimented it perfectly. As we went deeper and deeper into the jungle the air seemed to feel fresher and the surroundings calmer, the calmness only broke by the occasional Chital’s call from somewhere deep within the jungle my sight could not take me to.

Negotiating muddy trails between low-hanging canopies we went from one part of the forest to another and this being my first ever jungle safari, I was enjoying everything about it. Jungle safari in Bandipur tiger reserve had been in the cards since long and I was happy that finally, the lazy me made it here.

It’s Not Always About Sighting The Tiger

Some more driving through the ups and downs of the trail and while on our way to one of the many waterholes in search of the big cat or at-least any sign of it, the sleepy driver again stopped the vehicle abruptly and slowly raised his hands to his right.

A herd of Chitals and their fawns!

The group was lazing around carelessly until people in our bus again decided to get noisy and over-excited ultimately scaring away the poor souls into the jungle.

It had been almost an hour since we started and we were almost done with the safari, taking the trail back towards the main gate of the park when our dear driver stopped the vehicle yet again and this time pointed to the left. In a flash, everyone again jumped up from their seats and to the left side windows.

A herd of Gaurs, the Indian bison!

Thankfully this lot was significantly away from our vehicle so the shouting and excitement did not scare them away unlike the previous encounters.

At the end of it even though most of the people in the bus seemed unhappy or at-least not satisfied, probably because they could not see the tiger they wanted to, I for one was just fine with it because I had not come here just to ‘see’ the big cat in the first place. I had come to see how the jungle looks and feels from the inside, to see the inhabitants of the jungle in their natural home and doing their own thing, which I did. So I was perfectly fine (even though I surely would have loved the safari continued for a little longer). And about seeing the big cat?

Well, this was just my first safari 😉 .

Have you been to a jungle safari in Bandipur or in any other national park? What did you like the most about it?