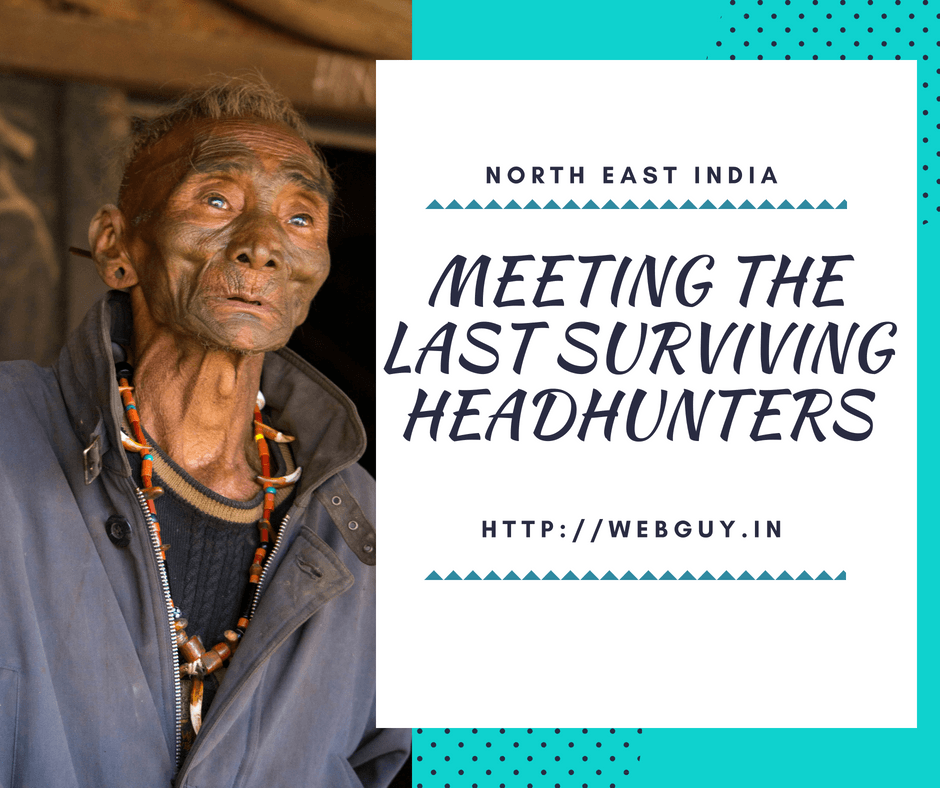 It was pitch dark when we finally reached the faraway village of Longwa, in remote Mon district of Nagaland. Ours was the only vehicle that was there at that time, heading towards the India – Myanmar border that evening. Some 50 kms back we had taken a left just outside Mon, the last town in this part of Nagaland. Longwa is literally on the international border that separates India from Myanmar. Unlike many other border towns/villages that I have been to, Longwa was eerily quiet. Yellow dim-lit bulbs (thanks to the low voltage) hanging from the thatched roofs of few houses in the village were the only sign of life that welcomed us here. But all said and done, we were finally there to meet the last surviving headhunters of Nagaland, the fierce Konyak headhunters.

Finally Reaching Longwa – One of the Remotest Village of India

We had arrived here after spending some wonderful time at the Hornbill Festival and then a couple of days at the beautiful hill-town of Mokokchung. So, the surroundings of such a remote village were very different as compared to the rest of the places we had visited on this trip. Longwa itself is a very poor village and so naturally, the infrastructure here was below basic to basic at best. But that is something that has never bothered me when I am traveling to experience something unique. In this case, I was leading a group of travelers and thankfully, all of them were likeminded.

After a tiring journey last evening followed by a very basic dinner, sleep came early. The warm sun in the otherwise nippy morning, after a good night’s sleep, felt really nice and soothing. A perfect way to start one of the most exciting days of the trip – a walking tour of the. That too, not because of one but two reasons.

What are they you ask? Read on.

Unlike most of the villages in the region, Longwa is BIG. Part of it lies in India and the rest (bigger portion) lies across the border in Myanmar. Even after the independence (read, the creation of the Indian border), the village remained one. And by one I mean that there is no restriction on the movement of villagers from both sides. The border does not mean a thing to them. On the other hand, inhabitants of this border village enjoy dual citizenship (in essence), of India and of Myanmar.

What’s more, the Konyak King’s (Angh) palace is literally divided between the two countries. Half of it falls in India while the rest falls in Myanmar. And the number of villages under the Konyak king is more on the Myanmar side than on the Indian side.

The Nagas all across the state of Nagaland are very skilled when it comes to hand-made things. People from headhunter Konyak tribe too, are not behind when it comes to handicrafts in Nagaland. No wonder, naga handmade jewelry, and opium pipes are one of the most popular souvenirs that you can buy in Lungwa. The locals have realized this well and you will find almost every household, selling some handmade thing or the other in this headhunter village. Not to mention the small ‘shops’ that have come up by the road that leads to the headhunter king’s palace. Some local ladies, in fact, come up with a small ‘market’ of their own right next to the Angh’s palace.

Walking To The Border Pillar And Meeting The Warriors

To trail to the border pillar of Longwa takes you through part of the village. Happy kids and beautiful wildflowers kept us company as we walked uphill, listening to the stories of our local guide.

The actual ascent to the border pillar starts as you leave the village on the left and catch a narrow trail on the right. Through bushes and uneven, kaccha steps we finally reached the top. The place where India ended and Myanmar started. There was no border and absolutely no difference between the two sides. The land was the same, the hills were the same and so were the people, moving freely from one side to other.

After spending good enough time at the top and enjoying the views from there, we slowly walked back to our home-stay. But not before paying our customary visit to the Ang’s palace. Sadly, he was out for a public meeting so we could not meet him this time but we did meet the queen and the prince. What’s more, we were even treated with pipping hot tea by there.

Back at the homestay, we were lucky enough to meet Penche Konyak, an aged, former head-hunter. Communicating with him through our local guide, we spent hours listening to his stories of those times. Of all the wars and wife-kidnappings and what not.

We asked him if he was happy about the changes that have come in the past few decades. The ban on head-hunting and the things that came with it. He talked about these things at length but if I have to put it here in short, in his words, it goes something like this:

The olden days were fun and I am proud of my time and my doings but, times have changed. The current times are definitely better than the olden times.

Meeting with the headhunters was a very unique experience for everyone in the group. We were lucky to meet them and get a peek into a way of life that is past now. A few years more and this generation of warriors will be lost. All that will be left will be documented accounts. No more actual experiences, no more actual interactions.

After a very overwhelming day at Longwa, we started for the plains of Assam the next morning. I am glad that I am going back to Longwa soon again and really look forward to having an even better time this time.

Have you heard of Longwa?