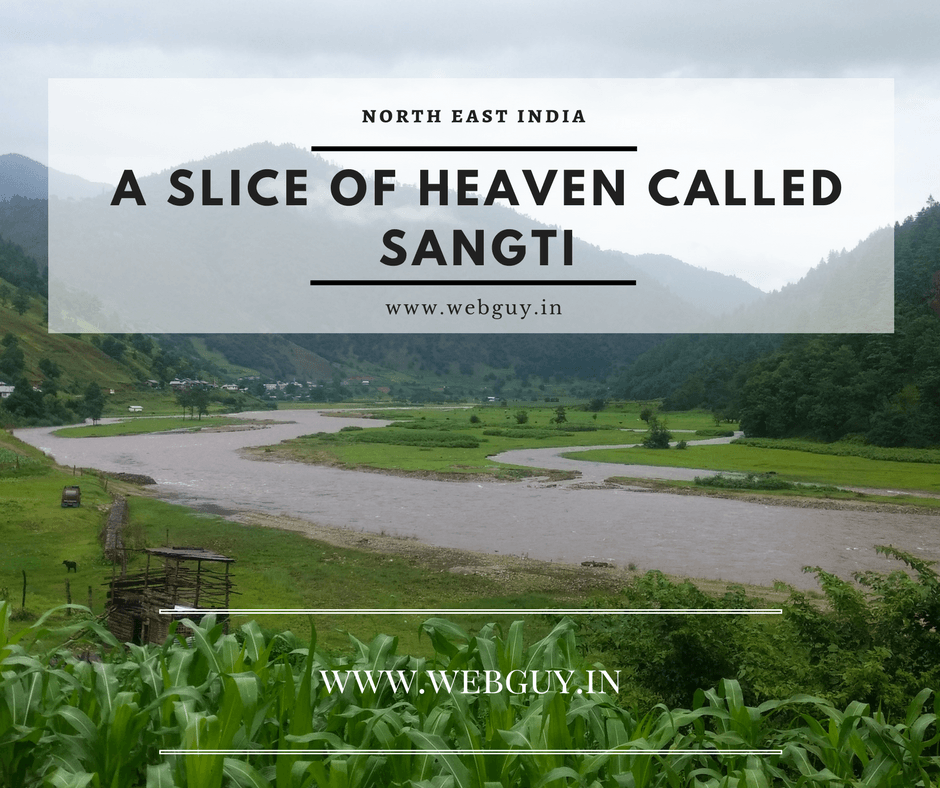 The trail we were on was slippery, the sky overcast with dark monsoon clouds hovering overhead and a roaring pahaadi river below that was nothing less than scary. It was a tricky situation to drive in and to be honest, we were on our toes all through the forty minutes or so of the drive. One small mistake and we would have found ourselves tumbling down towards the roaring Dirang river below. Thankfully, that did not happen and we safely made it to Sangti valley.

And barely a minute there and we were in awe of the place.

Places to visit in Dirang and around

The Sangti valley, thankfully, has been off the tourist circuit as of now. Among the other places to visit in Dirang and around, Sangti valley mostly never makes to the list. That was one of the primary reason we wanted to head there. Also, to be honest, the Sangti valley doesn’t have much to see for the quintessential tourist. It will charm only the people who enjoy nothingness and peace. No hotels in Sangti valley either, neither many places to stay in Sangti. Just a homestay or two. I just hope it remains that way, for as long as it can.

The charm of traveling during the monsoons, with all its uncertainties and landslides, is something which cannot be compared to any other season. Everything looks at its freshest best, everything looks so much alive. Sangti too, looked the same.

While the best time to visit Sangti valley is around October and November, June too, to me, is delightful. Flat paddy fields by the river below, dark monsoon clouds hanging above. All of it did its bit to make the scenery gorgeous.

As we moved ahead, colorful Buddhist prayer flags tied on tall bamboo poles, lining both sides of the only road there welcomed us. The small Monpa village seemed almost deserted save for a couple of old ladies who sat idly by their beautiful houses, scrolling their prayer mantra beads. The rest of the lot were out working in their fields, by the river below the village.

We first decided to follow the narrow road until the end of the village before coming back to explore the village, on foot. That, however, was not to be, thanks to the heavens that decided to open up. But more on that, later.

The deeper we went, the more glorious the place started to look. Sadly, you can go only as much if you are not on foot. The ‘road’ gives way to a trail barely half a kilometer from the village, which snakes up in the hills to the villages. To reach the villages, the only way is to walk. Something we were not eager to do, especially when the drizzle outside was heavy.

That, however, did not stop us from stopping in the middle of nowhere and gawking at the beauty all around us. I would be lying if I say I did not feel like not going back, more than once. Sangti does this to you.

We explored the village on foot when the drizzle stopped for a little while, trying to savor each moment before the evening gave away to the night. I know I am repeating myself but, the beauty of Sangti is indeed second to none. So much so that I was really in a fix about whether to write about it or not. Hardly any (Indian) tourists visit Sangti and that is something I would love to see it that way. Because accept it or not, Indian tourists, in general, are one of the most irresponsible ones with absolutely no concern for a place and its people.

I only decided to write about Sangti (in generous moderation) because for most desi tourists the ‘cost’ (the journey) of reaching Sangti will not be worth it. I hope it remains that way.

How To Reach Sangti Valley?

For those who genuinely appreciate nature and don’t travel just for ticking places off your list, this is how you reach Sangti:

Visit only if you can appreciate and respect the place and people.

3 thoughts on “A Slice Of Heaven Called Sangti”