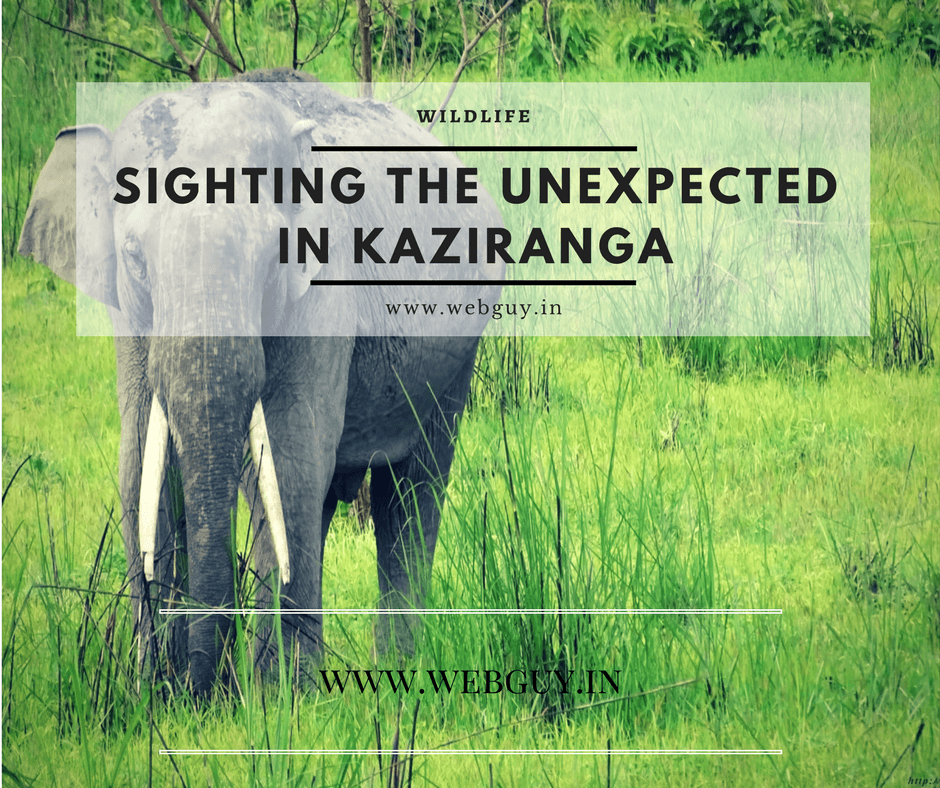 The tall grass moved suddenly. Then, it moved again and then once more. There was no wind which meant there was ‘something’ there. We almost knew for certain that it was not a deer, neither was it a rhino. The movement had been abrupt every time unlike when something is grazing. A baby rhino who is not really interested in eating? Maybe, but highly unlikely. Rhinos rarely let their babies wander out of their sight. Then what was it? We looked at each other’s confused faces in pin-drop silence. When we both knew none of us had the answer, we returned to keeping a watch at the tall grass barely 5 feet from us. And then, it moved again!

We were on our way back after our Jeep Safari in Kaziranga’s Central Range, Kohora when we saw the only jeep ahead stop suddenly and it’s occupants, a bunch of excited European tourists scramble to stand atop the vehicle they had been enjoying their safari in. Apparently, a tiger was sighted by their driver, at the far end of the thick grass field that extended from right next to the edge of our jeep trail. I would not lie here, I did laugh a little seeing the over-excitement of the chaps in front of us.

Just yesterday, when my guests (clients of my travel startup, North East Explorers) had asked me if they would be able to see a tiger in Kaziranga, I had replied in negative. After all, who gets to sight a tiger in Kaziranga! But then, our driver told us about another sighting nearby, in the morning. So, we (read, our driver) too decided to wait.

The Europeans ahead of us were doing all they could, to try and spot the tiger, using their telephoto lenses and binoculars. Behind us, the que of jeeps, which was non-existent when we had stopped, had gotten longer and so had the noise. We waited and waited but nothing. I was not feeling disappointed, unlike the others around me because I was certain that there was no tiger around. But that does not mean that I did not do my share of climbing on our jeep and look for the big cat.

Everybody was so engrossed in asking people around him/her to keep quiet that the place was literally buzzing. Why do people come to jungles when they have no idea about to how to behave themselves in the wild!! Had it been in my control, I would have made sure such idiots can never go inside any jungle, but alas! I was pissed and had half a mind to tell the driver to leave but I did not, thankfully! Because whatever happened next, no one was prepared for that!

While everyone, us included, was looking at the far end of the island ahead, the tall grass next to our jeep moved and out came the tiger!! Our driver suddenly turned into the most confused person around while I, as we Indians say, went totally blank. The tiger came out from the deep grass just inches from where our jeep was. I almost fell inside the jeep and so did the camera in my hand.

All this happened within a matter of seconds at most. Just as it had appeared out of nowhere, the big cat crossed the road and disappeared again in the deep on the other side. Everyone was expecting to get the glimpse of a tiger at the far end of where we were standing but the tiger decided to outwit everybody and gifted something very unexpected. People around me were jubilant, they had got more than the worth of their money. People take safaris inside Kaziranga to see Rhinos up-close, nobody comes here to see the tiger. We had been lucky.

And me? I come to the jungles because I love everything about them. I come for the sounds, the smell, the freshness, the greenery. I had never taken a jungle safari expecting to see the tiger. But now that I have seen one, from up-close, I would be lying if I say it was anything less than an exhilarating experience, something you are not blessed with every day.

**PS.- There is no photo or video of the Tiger because it all happened so quick & in such an unexpected way.

Have you been to Kaziranga National Park? Or had a similar experience?

11 thoughts on “Sighting The Unexpected In Kaziranga”